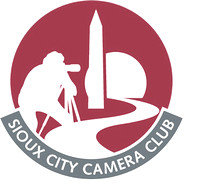 A Limited History of The Sioux City Camera Club

The following is a limited history of the Sioux City Camera Club gathered from documents, news articles, and oral member history. The majority of the information was provided by long term Club members who had accumulated it over the years.

The Sioux City Camera Club (Club) has been in existence since October of 1899 (four years before the Wright Brothers flew their first airplane).   A news article of February 3, 1900 notes that initially the Club had thirty-four members. The article recites that the members “have taken up photography as a scientific study” for the “development of the art and the promotion of the work among its members.” While the technology of photography has changed dramatically over the years, the purpose of the Club has essentially remained the same to the present day. The Club’s current stated purpose is “The mutual education and learning in the science and art of photography” and “to promote and encourage advancement of its members in the knowledge and practice of photography.” The news article of February 3, 1900 also reported in part that out “of a collection of nine opals, which were beauties for amateur work… one of these was a view of the raging old Missouri taken from the combination bridge, showing the Nebraska plains and the clouds above them in the distance."

In 1936-1939 a WPA (Works Progress Administration) poster (silkscreen color) was made for the Club’s second annual exhibition of photographs at the Community Federal Art Center in Sioux City. The poster shows a stylized man at a camera. It can be seen at the Library of Congress collections: WPA Posters, reproduction number:LC8-USZC2-1134. At least two other WPA posters were made for the Club’s 3rd Annual Exhibition (1940) and 4th Annual Exhibition (1941). (you can go to Google “WPA Posters Sioux City”).

One can imagine, that the Club now being in existence for about 121 years, has held its Club meetings in a variety of locations over the years. Club member, Willard Winford, in 1997, was asked to recall the various places that the Club held its meetings. Mr. Winford having joined the Club shortly after he was discharged from the service in 1945, recalled the Club met for different periods of time in the Williges building on Pierce Street; at the building across from the Woodbury County Courthouse (next to the alley and next to what was the Channel Nine TV station building); the old YMCA (formerly the old City Hall), the new YMCA on Nebraska Street; at a building (this building eventually became the Stewarts Beauty School on Pierce Street) next to the Rigadon Ballroom (a ballroom and roller-skating rink); at the old Central High School; the Art Center that was then located in the 500 block of Nebraska Street.  Member Ron Nicholls recalled that when the Art Center on Nebraska Street was being remodeled, the Club met at the First Presbyterian Church at 608 Nebraska Street before moving back to the remodeled Art Center on Nebraska Street; the Club later met at Morningside College,  Sunnybrook Community Church, First Presbyterian Church again, and is currently meeting at the “new” Art Center at 225 Nebraska Street.

Through the years, the Club members enjoyed socializing with each other during and away from Club meetings. Many of the Club members joined together for a variety of excursions such as field trips and events to various locations that provided photo opportunities. Some members would routinely meet for supper prior to Club meetings and discuss the day’s events as well as photographic interests. Club members would often meet at a Member’s home to judge prints or slides or to learn and practice a specific photography task such as close-up photography or portrait photography. Having desert at the end of the session was always a highlight.

The Club is a charter member of the North Central Camera Club Council, known as N4C. Club member, Francis (Fran) Kingsbury was a founding member in the creation of N4C. N4C is an affiliation of camera clubs in nine surrounding states involving approximately 42 camera clubs.

“The ‘NORTH CENTRAL CAMERA CLUB COUNCIL’ had its inception almost simultaneously in the minds of three men Robert H. Cochran, M.D., APSA. Omaha; E. Curtis Lugg, Sioux Falls, and Francis A. Kingsbury, Ponca and Sioux City. Fate decided that their paths should cross in the Spring of 1955, these three men sat on the front porch of the Kingsbury home in Ponca Nebraska where their vision gave birth to the North Central Council of Camera Clubs. From their idea that evening a tentative organization, created May 30, 1955, combined members of seven Camera Clubs located in Iowa, Nebraska, Minnesota, and South Dakota. Summer, Fall, and Winter Seasons were spent in organizational creation of many of the services still available from the "N4C", as the infant was nicknamed. Meeting at the Joslyn Memorial Art Museum in Omaha, January 22, 1956, resulted in adopting a Constitution, and in electing the temporary officers to their permanent positions. The N4C First Convention, held in 1956 in Sioux City, Iowa, with Francis Kingsbury as General Chairman gave the 123 delegates from the 20 member Clubs such excellent programs that it is difficult to uphold tradition in the subsequent Conventions. The now famous N4C, “Where Names become Faces and Faces become Friends” was originated during this gathering by Francis Kingsbury. The original officers were re-elected to complete their assignment to build an active and lasting N4C”. (The above paragraph copied from the N4C webpage).

The Club also has been and remains a member of the Photographic Society of America abbreviated as PSA. The PSA was established in 1934 for all levels of photography interests including individuals and camera clubs and is an international non-profit organization to promote photography. During the 1938-1939 print interchange exhibition of the PSA, four members of the Sioux City Camera Club who had submitted photographs each had a photo admitted by an international committee for showing. These members were Ed Gaither, Fred Haitz, Don Brastow, and R.D.Troutman. The photos were exhibited throughout the United States and Canada along with other photos admitted from numerous countries. A total of 1,064 photos were submitted for consideration for the project and 479 were admitted. The newspaper article (about 1939) that described the honor to the Sioux City Camera Club members stated:

“The exhibitions of the camera club reveal the versatility and talent of the members.  Their splendid results are the product of much picture taking.  Camera friends are never without their vest pocket camera, and their ‘snapping’ goes on from day to day.  Contrary to popular belief, expensive cameras are not essential.  The ordinary ‘box’ camera often breaks the moving stream of active life down into a ‘still’ of surpassing beauty, trenchant thought of stark reality.”

The current SCCC Club Logo was designed by Steven Crabb, the son of long time Club members Larry and Marcia Crabb. Steven, a design and marketing professional, designed the logo for the Club in connection with the Club hosting the 2000 N4C Convention. He designed several options (his proof sheet is one of the attachments). The Club adopted his unique logo (shown at the top of the first page) that represents the Club’s proud connection to Sioux City, Iowa for the last twenty years (note the representation of the Floyd Monument and the Missouri River).

The Club, through its existence of 121 years, has survived many challenges to the citizens of the United States including wars, economic downturns. epidemics, and pandemics. In spite of difficult times, the strong interest in photography will likely sustain the Sioux City Camera Club for many years to come.